This page is my "blog".
It's just a place to leave some thoughts and things that are going on. Some will be about software, some about humans and some about both. I'll try not to post about the brand of my new toothbrush unless it's really important :-)
the latest entries:
The seven habits of highly effective people
The Mom test
Der letzte Weynfeldt
Google-free Android on Fairphone, again
Other minds
Risiko
The Why-are-you-here Cafe
Herbstmilch
Mit brennender Geduld
25 Feb 2009
Anders Johansson: Pedestrian Simulations

Anders Johansson gave a great talk here at Decoi 2009 about the work Dirk Helbig directs (he is currently in Zürich - here is a 3Sat video of a german interview) concerning the simulation of pedestrian crowds. This research has over some years evolved to a rich set of tools and he was able to entertain us with nice 3D-videos of their simulations. I will shortly highlight the main topics he addressed.

The social force model
Their model is based on a swarm algorithm: Agents (the pedestrians) follow their own goal, but are influenced by others (others can be other agents or walls). They want to be close to others, but not too close (this is called "repulsion"). Then, they added to this proven local algorithm what they found useful. For instance, agents have individual traits like acceleration (how fast they can be and how fast they reach this best tempo).
You can also describe the external forces influencing an agent as physical (strong, but short-lived) and social (not so strong, but affect the agent longer).
By illustrating each step in the model building with a small 3D video of people approaching each other, we really could watch the model becoming quite realistic.

Real-world data
A lot of the work has been done in extracting real-worlf behavior from videos. They filmed people moving through metro stations and shopping malls. It is a quite demanding task to extract all individual pathways from the video, but they have a good algorithm now to do it. Then, they can replace one agent in the extracted data with one simulated agent (who works according to their model) and find out how good the model predicts what a real human does. Do this a lot for many combinations of people and adjust your parameters a lot, and you can make your model better.
It should be noted that of course the video can't tell which intentions humans had - if someone remembered he forgot something, he'll turn around. Also, the real humans had a high variation in their behaviour.

Evolution
Some work has been done to evolve an agent strategy via a 'blind' evolution algorithm that just tried to evolve a model that predicts human behavior very well (you notive that this is a bidy of scientific work spanning years).

Macro Level
Now, when you look at groups of pedestrians from a macro level, you can describe crowds in several ways: 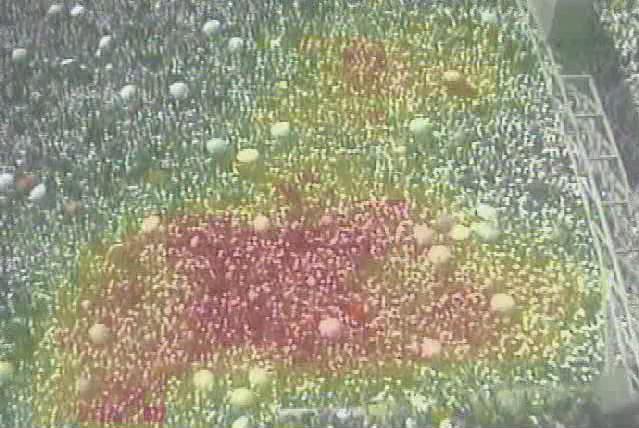 Real stampedes
The research group also studied real mass accidents that happen in night clubs or football stadiums around the world. In fact, Anders just arrived from Saudi-Arabia, where Scientists study the mass accidents that regularly happen during the Hajj in Mekka. We got introduced to the terrain and special problems of this occasion (for instance every single of this 3 million people needs to do the exact same thing at the exact same place). We saw some stunning videos from 2006, when they started to film the crowds (luckily, we didn't saw the big accident of 2006 itself). for the next Hajj, the organisators took several measures like defining routs in which to go (slowing down traffic and leaving areas free for emergency support), building important bottlenecks over several stories and simply registering a considerable amount of visitors to be able to spread them over the week.

Accident prediction
A nice feature of a model would now be to predict an accident from such a video. They found that a measure called "gas-kinetic" works best for them. This indicates the crowd density and the variation in velocity. When both are high, an accident becomes more likely. However, they are hard to predict. In almost well-known examples, something innocent triggered the mass panic (like a fight between two women in a Chicago night club or the rumor about a suicide bomber in Karbala, Iran).

#
You are seeing a selection of all entries on this page. See all there are.