This page is my "blog".
It's just a place to leave some thoughts and things that are going on. Some will be about software, some about humans and some about both. I'll try not to post about the brand of my new toothbrush unless it's really important :-)
the latest entries:
The seven habits of highly effective people
The Mom test
Der letzte Weynfeldt
Google-free Android on Fairphone, again
Other minds
Risiko
The Why-are-you-here Cafe
Herbstmilch
Mit brennender Geduld
20 Dec 2008
Cognitive enhancement versus sustainability 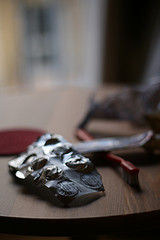 In recent years, mind-doping has moved from science fiction to commonplace, at least that's what they tell us about US universities. Here is a recent article from the german "Die Zeit" and it is also a scenario discussed in the book "Radical Evolution". Students take cognitive-enhancing drugs like Ritalin (there are many more, it is a hot market) to get ahead of competition during exams. US researchers are now demanding to talk openly about it, and are provocatively proposing to give all students access to such drugs, for equality. Neuro-enhancement will come, the only question is when, how and of course the price.

This is scary, not just because it feels not right to a lot of people. It also says that there will be a more direct mean to turn money into success. If you are rich, you can afford the best drugs to make you more able to perform, to concentrate on only one thing, and so on.

But maybe, hopefully, this is not the only road this can go down. Paul Graham recently talked about why he thinks a successful society relies less on short-term evaluations like exams and more on actual, long-term successes like finishing a project at work or founding a startup. A society should define its success in keeping direct influence from money to success down. He sees a difference in the US a couple decades ago to the US now - money hogs like elite universities and big corporations have become a little less relevant (meaning: they don't hold the monopoly on the road to success anymore) *.

There are some drugs that might translate into medium-term success - for instance, Provigil lets you depend less on sleep and is taken by military pilots. But for these things I see a reasonable middle ground. People who overdose will not have long-term success. It's just like workaholics tend to break down after some time.

I hope that the trend Paul describes is real and will hold. Like all effects we have on the world should be valued more by their sustainability, we also need to regard human work success under the view of sustainability. I don't see a drug at the horizon that not just makes you a better performer, but more "intelligent". For me, intelligence is a long-term concept.

* Of course Paul promotes startups as the new thing in the rest of this article. He is advertising his startup seed company. But let's not bash him for that right now. I like to think of "startup" as a broad term, and be less enthusiastic about them how they are today and then Paul actually sounds reasonable most of the time.

#
follow comments per RSS
on30 Dec 2008 - 15:46 fromSadi
I think, You are wrong, if you think, drugs are making You somehow more intelligent. And i don`t think, it`s a matter of price, advantage for richer ones ff , "Ritalin" f.e. is very cheap, other new fancy drugs are only expensive because they are new. Drugs of any kind are helping You to focus on the elementary contents - if You are supposed to think logical, You eliminate all creative thoughts, or if You just remember basical stuff You had to learn and now have to display, they might help. Or - and this drugs You didn`t mention - they are helping You to be creative, step into new sights ff. (Some of that drugs are alcohole, LSD f.e.) Especially Your profession demands creativity and logical work (inspiration ./. transpiration). Drugs of any kind may help You in both situations - IF (and that is very important!!) You need it. And: Of course every drug has side effects, and of course every use (or abuse) may be dangerous. Drugs like alcohol are pretty old and have wellknown side effects, the newer drugs like Ritalin are not wellknown in long-term danger. Drugs are not producing intelligence, but the only thing that matters is: Do You destroy some parts of Your intelligence (A lot of them do it!). So all in all this is not "scary" - drugs are part of human development since the beginning. Of course there are dangerous drugs with heavy side effects and drugs less dangerous. What really is needed is another way to step into science. And the best drug of all is human collaboration like brainstorming ff. Situations like examinations with reproduced stuff only are to be avoided - they are anachronistically anyway in times of the www. And You won`t need drugs to pass them any more. And for Your profession: Computers that have to be programmed the old fashion way should be replaced as soon as possible - they are just crooks+crutches, nothing more. THAT should be the first step on the way to AI. Regards Sadi
[link]
on08 Jan 2009 - 8:25 fromNic
So did you take LSD before writing that comment? :) Because I specifically did *not* say that these drugs make you more intelligent. I could have said more about how these drugs are different or equal to older drugs. I think one difference is how they are designed for one specific task (i.e. deprive sleep) and that also makes them expensive (until someone copies it).
[link]
on18 Jan 2009 - 17:41
ok, forget it
[link]
on18 Jan 2009 - 17:41 [link]
on19 Jan 2009 - 12:38 fromNic
I am sorry, but well, what did you expect? I got misquoted by you on my main point: That drugs do not make you intelligent (when we see intelligence as a long-term concept). I say that at the end of the text. Basically we seem to agree. You explain better than I did how intelligence should also be seen as a wholistic concept (logic + creativity, collaboration). Especially collaboration is where drugs might bring about negative consequences. A good communication on drugs is not easy to have, because if the partners experience it differently, miscommunication is probable to appear. Maybe that is why alcohol is so successful - we have learned how to use it together.
[link]
You are seeing a selection of all entries on this page. See all there are.