This page is my "blog".
It's just a place to leave some thoughts and things that are going on. Some will be about software, some about humans and some about both. I'll try not to post about the brand of my new toothbrush unless it's really important :-)
the latest entries:
The seven habits of highly effective people
The Mom test
Der letzte Weynfeldt
Google-free Android on Fairphone, again
Other minds
Risiko
The Why-are-you-here Cafe
Herbstmilch
Mit brennender Geduld
17 Mar 2008
It's the culture, stupid! 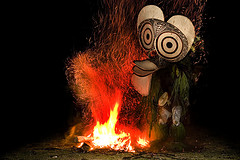 There is a beginning discussion that the wealth difference between the West and other parts of the world is not just a result of mere aggression. And it is not only noticed in the West. As others realize their shortcomings, the West has to work even harder.

Don't get me wrong, there is aggression out there, but a lot of people recognize that it doesn't make up for the whole equation. Writes Jeff Vail:

I can think of one justification that remains to some degree in America—we still seem to be better than anyone else in the world at combining just the right mix of structure and freedom, discipline and creativity, conformity and rebellion to create the kind of synergy that drives business innovation. That, too, seems to be changing, but for now I think it still justifies some kind of multiplier—but this mix is also subject to the forces of globalization.

It is too few people who see that this cultural difference is not only something we should defend and strengthen (e.g. against islamistic threats) for moral reasons or because we owe it to our forefathers who achieved all this. It is our most important asset in the game of wealth. It is what sets us apart and makes our wealth possible. And it is no constant. It can go away.

However, I am not posting this to make that point yet again. I came across two sources that show how this reasoning makes its way into scientific discussion:

A recent study by Herrmann, Thöni and Gächter (published in Science magazine) conducted cooperational games among students in a world-wide experiment. Groups that cooperate can maximize their profits, but individuals can also defect the others. In addition, punishment was possible. The paper can be found here (without paying a Science magazine fee) and a comment that also appeared in that Science issue is here. It concludes:

A few subjects, when punished, rather than contributing more, suspected that it was the high contributors who punished them, and responded with antisocial punishment: They punished the high contributors in future rounds, leading the latter to reduce both their contribution and altruistic punishment. Herrmann et al. collected data in 15 countries with widely varying levels of economic development. The subjects were university students in all societies. The authors found that antisocial punishment was rare in the most democratic societies and very common otherwise. Indexed to the World Democracy Audit (WDA) evaluation of countries’ performance in political rights, civil liberties, press freedom, and corruption, the top six performers among the countries studied were also in the lowest seven for antisocial punishment. These were the United States, the United Kingdom, Germany, Denmark, Australia, and Switzerland. The seventh country in the low antisocial punishment group was China, currently among the fastest-growing market economies in the world. The countries with a high level of antisocial punishment and a low score on the WDA evaluation included Oman, Saudi Arabia, Greece, Russia, Turkey, and Belarus.

This news is big:

China will tolerate experiment failures by its scientists to ease pressure, encourage innovation and cut the chances of fraud, a top official said on Thursday.

China recognizes a cultural shortcoming in its scientific community. The ratio of worthless or even wrong studies is far higher than in the West. As far as I know, this is not rooted in the very old chinese history. But at least in the last 100 years, China has built up a dangerous perfection cult. Dangerous for its own progress, that is. It is politically remarkable for the change China is going through that this is acknowledged.

So, while the Middle East suffers from its honor culture, China wrestles with perfection cult.  I am not saying that we don't have cultural problems on our own. My point is:  (at least some) others are working on their self-understanding. Let's start working on ours again.

sincerely a question that should be discussed, but why starting with Jeff Vails statement?

May be, You can excuse his exaggerations as a typical us-american speech (everything in the USA is "best of the world"),

but especially "freedom" in this "mixture"???

With a rate of nearly 3% imprisoned (a third because of drugs) the USA are world champion in a sad point: the worlds highest number totally and by inhabitants.

And: The us-american "way of life" is based on a big amount of debts - it will be pretty exciting, what will happen in the future, but the deficit is now  to be reduced by inflation of the US-$.

So: from my point of view a little modesty is recommended to Jeff Vail,

Yes, he is exaggarating Americas superiority among Western nations. But it seems to be hard for them not to do (since part of their success strategy is telling themselves each morning that they are the greatest - a nice psychological trick).

I just used it in the beginning, because harsh statements keep readers reading on - and didn't you? :-)

In another text, Vail speaks of the "ubiquitous, shortsighted decision making of corporate America". (Smart) Americans are not like Europeans: They know modesty, but they only show it when they want to.