This page is my "blog".
It's just a place to leave some thoughts and things that are going on. Some will be about software, some about humans and some about both. I'll try not to post about the brand of my new toothbrush unless it's really important :-)
the latest entries:
The seven habits of highly effective people
The Mom test
Der letzte Weynfeldt
Google-free Android on Fairphone, again
Other minds
Risiko
The Why-are-you-here Cafe
Herbstmilch
Mit brennender Geduld
08 Dec 2014
My favourite five slides from DockerCon Europe 2014

Last week I attended DockerCon Europe 2014 which luckily happened in Amsterdam this year. I got my finger on the pulse of important developments in the ongoing evolution of the internet and a just-healthy dose of tech-optimism from current Silicon Valley prodigies. I thought I'd share my five favourite slides with a little comment on each. 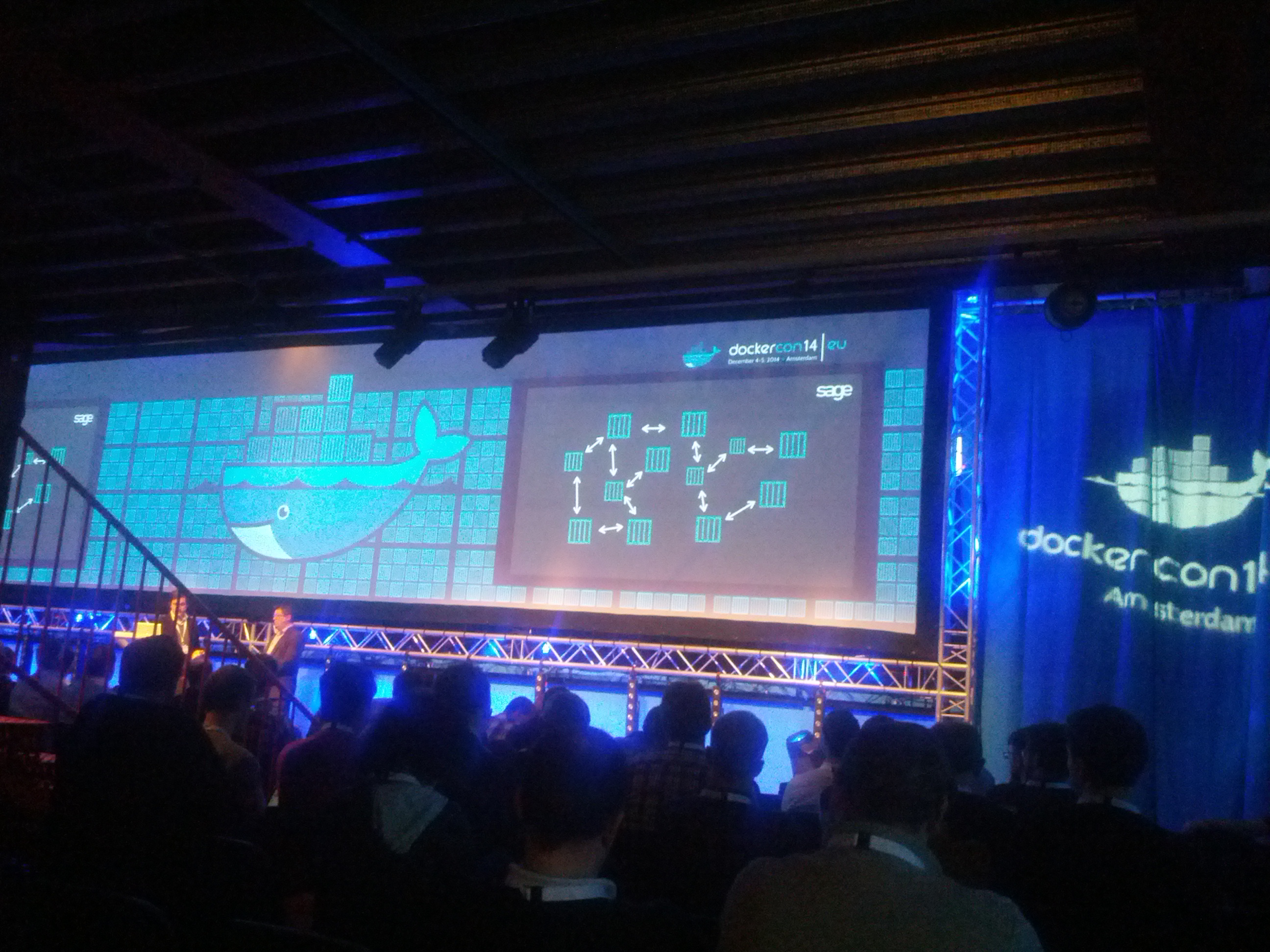 The internet is still a technological Wild West. So many talented people. So much change and progress in technology each year. So many things you need to know to deliver something that doesn't break for some reason. So much still to achieve. Docker provides a usable (fast and well-documented) way to bundle into a container some things that you know are working, then upload this container on any server and expect this functionality to be up and running and simply work as you expect. It wasn't a DockerCon talk, but I like this short breakdown of what holds us back and why containers can help a lot (9 slides). At Softwear, we are using Docker both in the CI workflow and partly in production (by the way, let me know if you want to do influential UX or QA engineering work for us). The slide above shows the way of thinking going forward - build stacks from things you know will work and will also work together. Like Lego. Then make these light-weight stacks (your actual web applications) work together in creative ways. The current term for a picture like this is "Microservices". This slide from Adrian Cockcroft (who spent six years at Netflix) makes the point how useful Docker will be in more detail. Adrians presentation (all slides) probably generated the most food for thought. My favourite line (slide 26) is:

DevOps is a Re-Org!

meaning that software developers are taking over system operator/admin - tasks in any company which does not actually run data centers (which is becoming a very concentrated business nowadays). 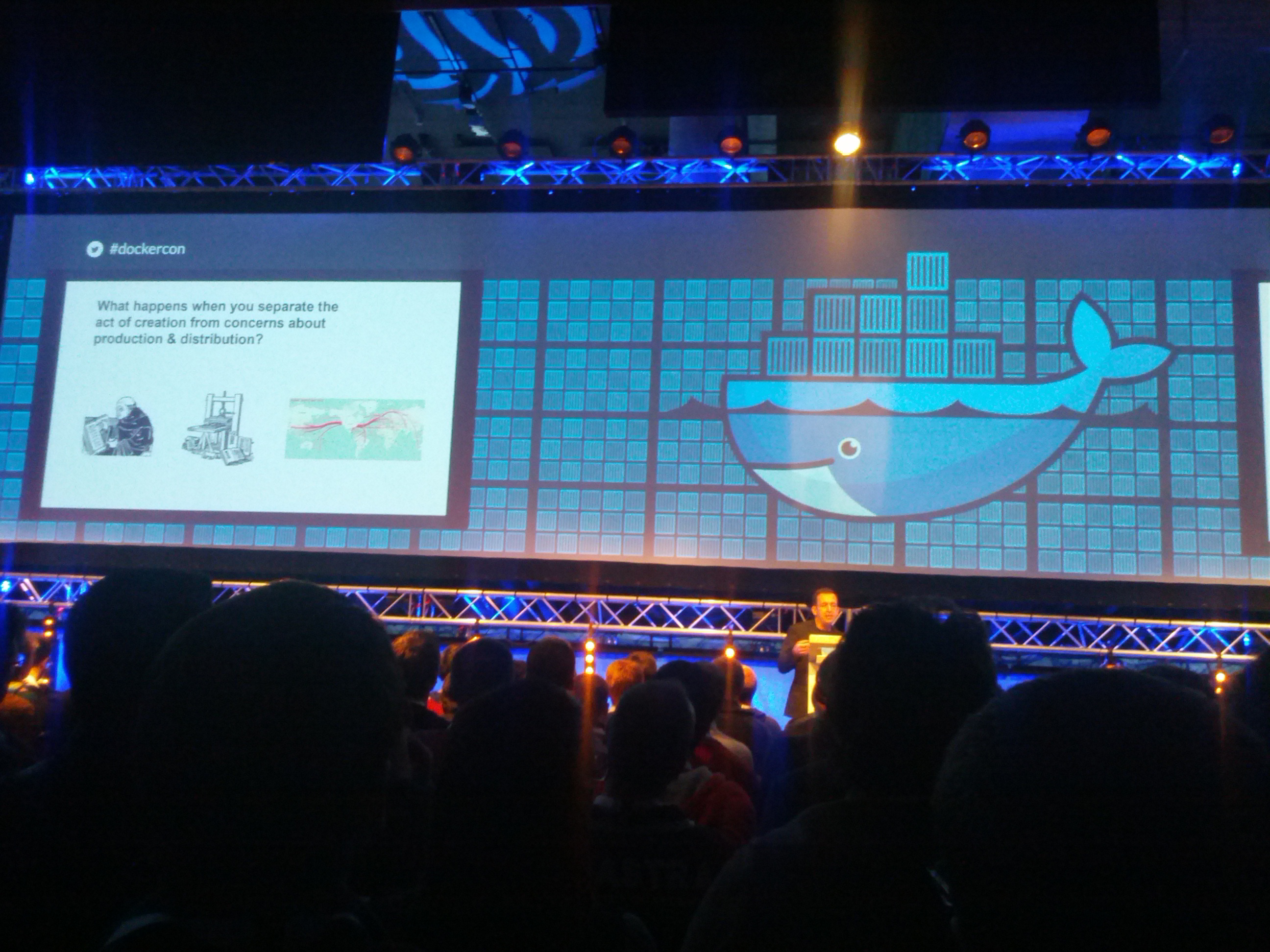 Next, we get to some Silicon Valley - style notion of how suspected technology breakthroughs will change society. Docker Inc. CEO is asking here:

What happens when you separate the art of creation from concerns about production & distribution?

Subtly, there is a picture of the printing press. He wants to say that creators of web applications soon might need to worry less about how they will deploy their app such that it will work, as the "container revolution" will make this trivial. Of course, the web 1.0 kind of already did that for content. However, I can see how lowering a crucial technological barrier for inventing useful web applications can really be significant to innovation. We have a lot of content and ways to get it out there, now let us see what cool applications can be built to assist people everywhere in the world. And although we at this conference were a bunch of rich white males, poor people are hopefully getting access to cheap smart phones soon (Africa is a good example). I, too, find these times exciting. But I was glad to return to my normal life, and to cool down a bit. 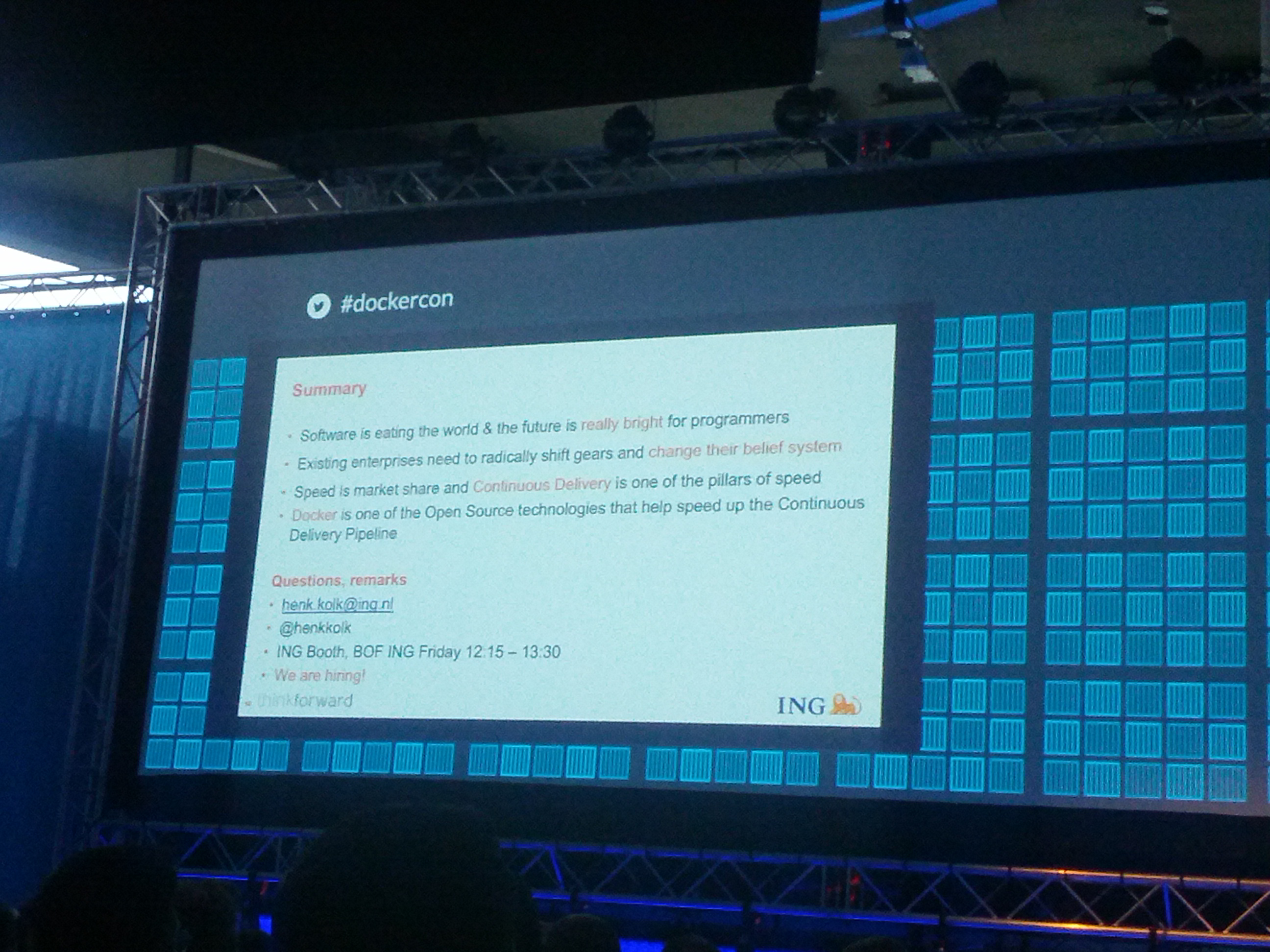 This slide gives an indication of the scale of change we are seeing in the software world. Henk Kolk from ING told us how this large bank sees itself as a technology company now and removed everyone from their large IT team who can not program at least something. Being a programmer means being in demand right now but as his slide says as well, speed is key from now on. If you don't get on board with this new way of having tight control over your stacks, together with being totally flexible towards switching technologies, all you will be doing is to jump from one sinking ship to the next. I got both excited and chilled, actually. 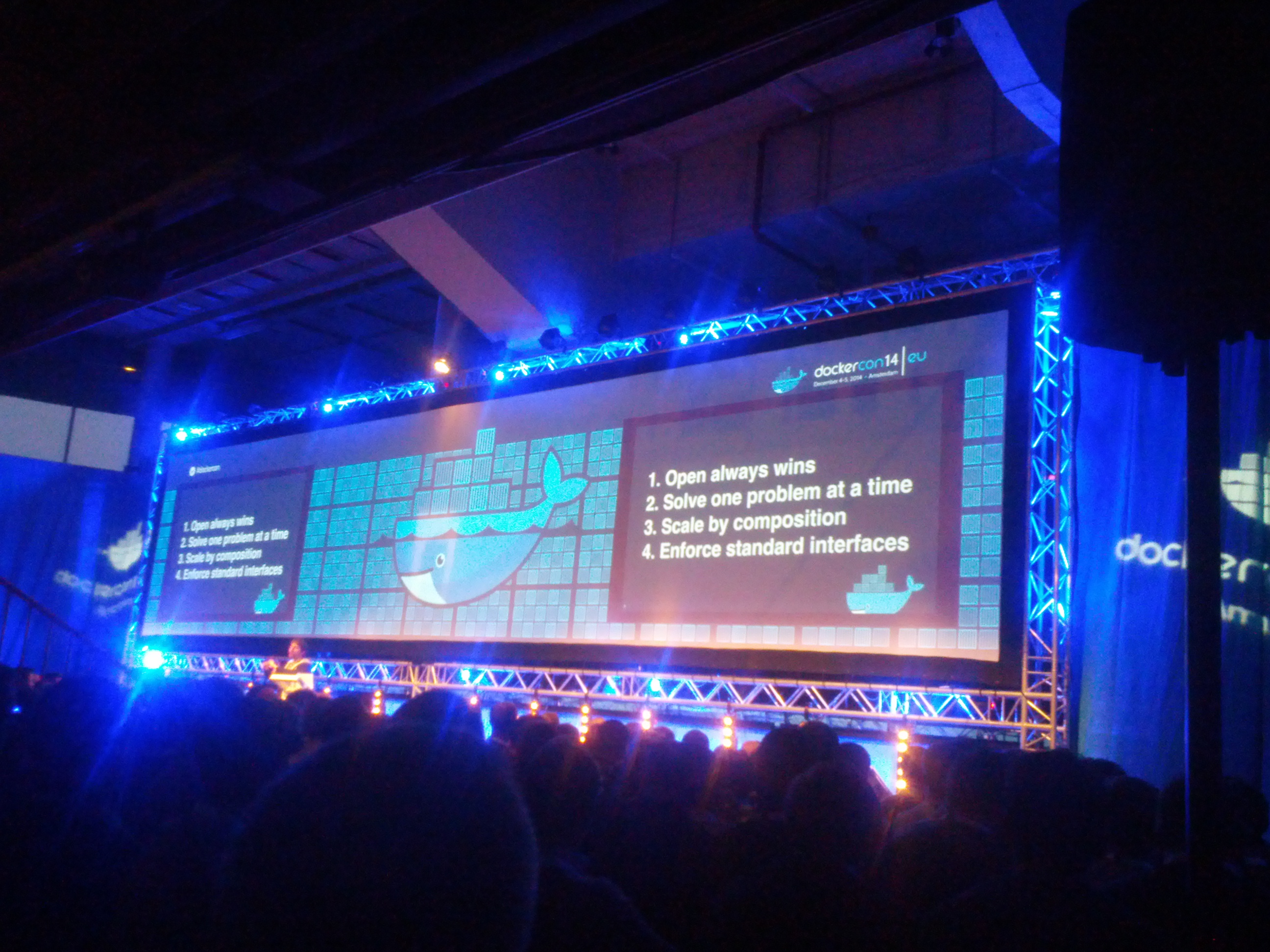 An interesting take away of the current weeks is how Open Source currently works. Big money has gotten in on it, because in the software world, you have to invest in widespread and sustainable technology while also having a modern stack. This only works when an open source community carries the technology. Even Microsoft is coming around in major ways. Companies are actually employing the best open source programmers directly to stay on top of things. The industry is a bit different than other industries in this regard (hopefully actually leading the way). On the slide above, Docker Inc. CTO Solomon Hykes is giving us his current set of the rules that he thinks make a technology successful these days. As a consequence, Docker got some interesting new functionality (announced on the first conference day), but it was kept out of the core code - "Batteries included, but replacable". 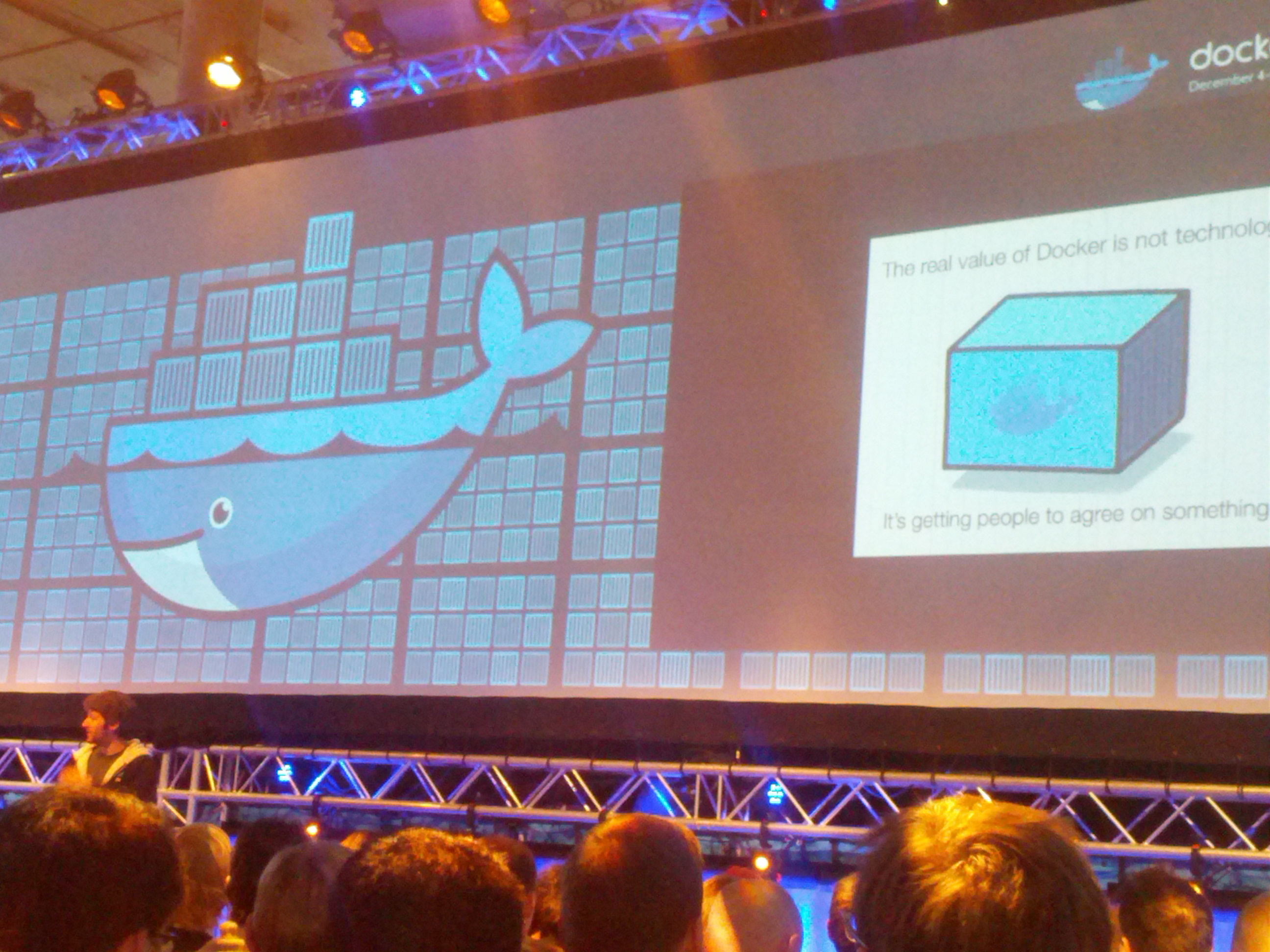 But it is also not all agreement and happy collaborative coding. No, sir. The latest trend is that a company or a startup guides an open source technology. This makes progress faster and stable, but it can easily break if you annoy the comunity. Node was just forked, AngularJS is having a community crisis. The Docker community is also weary of the Docker startup Docker Inc. In fact, Solomon Hykes spent a lot of his time on stage at DockerCon Europe 2014 to discuss how he wants to succeed as a steward of the Docker technology, using a process he calls "Open Design" (see all slides here). There is an Open Design API through which all feature requests have to go, thus separating people acting on behalf of Docker Inc. from people acting on behalf of the Docker Open Source project - no matter which company pays them at the moment. They are creating and updating their own constitution which deals with this construct as we speak (of course in structured text files, so if you suggest a change, you submit a pull request). So the message of this slide above is simple and compelling:

The real value of Docker is not technology. It's getting people to agree on something.

Replacing "Docker" with any standard, this is something you could also have said during any time of rapid development and change. Interesting times.

P.S. There were some really smart people at this conference, building amazing companies and systems. We can expect to see a lot, e.g. from the Apache Mesos project. I could have chosen more technical slides for this list, but it would have taken me longer to explain why I fancy them. A lot of them were also quite intimidating, actually.

# lastedited 07 Jun 2015
You are seeing a selection of all entries on this page. See all there are.