This page is my "blog".
It's just a place to leave some thoughts and things that are going on. Some will be about software, some about humans and some about both. I'll try not to post about the brand of my new toothbrush unless it's really important :-)
the latest entries:
The seven habits of highly effective people
The Mom test
Der letzte Weynfeldt
Google-free Android on Fairphone, again
Other minds
Risiko
The Why-are-you-here Cafe
Herbstmilch
Mit brennender Geduld
13 Nov 2009
Can we buy your flexibility? 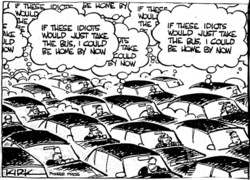 When we use a common good, we cause the most expense and anger when we all use it at the same time. An idea that is now being tested in several places is to convince a small percentage of people to deviate their usage of the good from this popular time points. It is generally agreed that in many cases,  a change in the behaviour of very few people can already relieve a system of much pressure.

The current consensus seems to be that the system operator should pay people for that. If someone actually has the flexibility to deviate, the opportunity to earn or save money might make him actually identify and use it.

I see this in electricity markets, where demand peaks can maybe avoided by convincing a couple of devices to stop operating for a while and also in traffic management: The city of Utrecht plans to pay a commuter €4 per workday if he doesn't use the highway A2. They will have to devise some solutions where they film the numberplates of passing cars, but building new streets might be much more expensive (not to mention how much trafic jams hurt the economy and the mental wellbeing of commuters).

This can be a very effective way towards more efficient usage of common goods - but there are hurdles like the increasing hunger for usage data that comes along with it. Not many people will like that and we will need to talk about this. The good news is that if the mathematicians are correct, not everyones flexibility is needed.

Update: The Netherlands now plan to tax highway usage for everyone via satellite by 2012 (like the Germans already do for trucks). This system is more flexible, but also harder to accept.

Aren`t you really aware, that the "new system" you desribe is nothing else but a nearly ancient old idea? Which world do you live in? (Phd? Where??)

The idea to avoid peaks by price is as old as the technique to produce electricity out of coal ff itself. It´s no new problem and ways to avoid peaks have always been thought over.

It really became important, when nuclear power plants were built and a lot of base load was produced - and ideas to get get rid off it, too, of course.

But of course peaks in daytime were occuring, too - and a lot of ideas, how to egalize them.

With (and only with!)  a cheap offer of "electricity priced  on demand"  metal-producing industries in middle-europe became profitabel long time ago - aluminum of course, later high-grade steel, too, only are profitable with cheap electricity. Here (in these old days up to today) you find your ideas very clearly:  if possible, they (the factories) use and are offered cheap (out of peak) electricity. Their melting process can be interrupted for a while without any problems. If it`s impossible  they pay more, of course.

But for small private consumption your ideas are also very old: In every less than 30- year-old private house (modern or modernized) the cables are already structured to help to avoid peaks -  extra cables leading to big consumers like washing machine, boilers, heating of every kind  etc. are installed there and ready to be interrupted for a certain time to avoid peaks (and save money, of course).

Result: The only open question is not how to create a new idea, but:

How can very old already installed structures in these systems  come into function, resp. : Why haven`t  they been set for so long?

It could be very simple: Two counters in every household (one for cheap and one for "normal" price), a signal send out by an administrator switches them (with relays) and a little system allows the users, to run the boiler/WM/heating or not. You save money by your own plan and conditions.

And all this without any listing of the habits of these users, no controll, no misuse of datas.

So - what are you proud of? Creating ancient old ideas??

Instead of watching, learning, seeing what`s already there and - if needed - just enhance it?

(P.S. The idea of paying people not using a street, is just crazy and against every law, of course. It´s forbidden, to list up the habits of people. Not only in NL. But that´s a basic condition for it.)

Your trolling gets worse (if possible).

I observed what deciders are currently considering. If I actually have my own ideas on this someday and I decide to post them here I will draw a big lightbulb next to them so that you might understand.

The rest is mostly stuff that we already discussed in June, I believe and on the most part agreed.

You say: But for small private consumption your ideas are also very old: (...) extra cables leading to big consumers like washing machine, boilers, heating of every kind  etc. are installed there

What now? Small or big? The small customers have no 'smart' control mechanisms available yet besides night time prices here and there. All control so far is central.

I didn`t  realize, this is just a private meant diary no one is supposed to critisize. Other guys lock stuff like that instead of publishing it by www. (and do better this way!!)

It`s right, you published the same nonsense in june already – what did you do meanwhile?

And – beside – what kind of “Phd” do you target? “Reapeating nonsense”?

You name me “troll” – well, that’s the normal reaction after being picked to pieces. I know it from other semi-religious (and defended) public mainstreams.

But are you sure, to be on he right (true) side?

It`s true – a lot of groups are “working” on a plan to invent “smart grids” worldwide. I know a lot of their results (if already published) and they all have one in common: They have no idea of any reality.

But they are spending a whole lot of money and – after all – it`s my money, too: It´s a part of my bill as a consumer of electricity.

They have one thing in common: It`s very easy to pick these concepts into pieces (like yours).

I appreciate, you try to describe your targets in easy words. I just wonder, why you don`t see yourself, its nonsense.

Other groups overlay their nonsense – e.g. with a lot of technical terms.

My advice: Do the same! At least you can pretend this way, it`s difficult. issue. And in case of  contradiction you can pretend not having been supposed to see them in advance.

I might appreciate, you`re just targeting an easy “Phd” (I call it: wait loop) and sincerely don`t aim to cash a pretty good income (at least not yet).

And – moreover – of course you aren`t supposed to toggle its nonsense your advisers are producing (and earning a lot of cash with it). Unfortunatedly it’s consumers money (mine too), you`re wasting.

You didn`t answer my question, why you (your project leaders) don`t give the easy way to reduce peaks (and save consumer`s money immediatedly) a shot.

And the energy-producers ìn fact aren`t anyhow interested in reducing the consumers , too.

>being picked to pieces

Whatever you say :D Seriously, aggression does not equal success.

I have stopped trying to look for the good parts in your posts - it's like looking for a raisin in a rotten melon. Each time I dug through the hatred, personal vendettas, conspiracy theories and false accusations to do that and tried to answer as best as I could at that point, I was only met with more of the same old and had to notice that you don't read what I say.

You're not entitled to my time just because I have a website and you are an angry guy with internet.

I should program a simple comment moderation system like many other people have, but I don't have the time so for now, commenting is off.

[link]
You are seeing a selection of all entries on this page. See all there are.